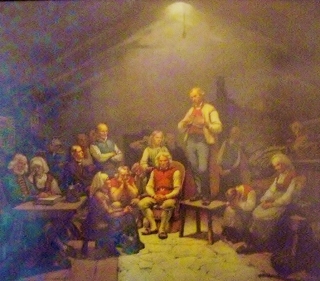 So I finally got this framed print hanging on the wall in my living room. It’s called Haugianerne, or The Haugeans. The original was painted by Norwegian artist Adolph Tidemand in 1852 and illustrates an 18th to 19th century spiritual revival movement in the Church of Norway. I’m always delighted when my family research leads me to this kind of historical context. It means I get to learn things … not just about my own family … but about people like the artist Tidemand … and about the Haugeans … and about the man Hauge, who led their movement … and about the amazing Norwegian local histories (or “bygdaboks”) that provide such rich detail about community life in Norway.

Other descendants of the Maehlum (Malum) family preceded me with stories about that family’s devotion to the Haugean movement. This devotion was seen most strongly through my 3rd great-grandparents, Arne and Marit, in the 19th century. They never left Norway, but some of their descendants, including my great-grandmother, did … for Iowa. The Haugeans got their name from a farmer named Hans Nielsen Hauge, who seems to have had a mystical experience that compelled him to go about Norway on foot as a Christian lay preacher. This was against the law at the time for those not ordained by the state church. He was imprisoned for a while but apparently undeterred. Through a network of homes and families, the Haugean movement grew within the church, mostly among rural people at first, then more broadly. It’s a heritage that probably influenced many Norwegian immigrants to America.

Still, it’s apparently a revival movement that is neither widely known nor understood by most Americans — at least not those outside the Lutheran Church — so I’ve been trying to dive into the details. The information available about Hauge himself is somewhat sparse, and the books devoted to him seem fairly obscure. In the meantime, feel free to view this series of  short, rather charismatic videos  about the man and the movement.  The Haugeans are a little reminder that God is continually renewing His church …. always has and presumably always will … How timely.

“There was great joy when haugianier friends came to Arne and Marit’s house … In such a company of friends, they had a desire for things belonging to God’s Kingdom…” (Oyer Bygdabok, as translated, quoted by Carmen J. Moe, in Sleeps Not the Valley).

3 Responses to Haugianerne in my home