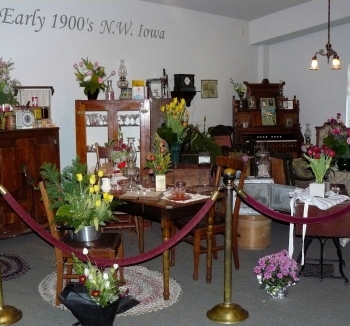 On a recent trip to Orange City, Iowa, my mother’s hometown, I finally had a chance to visit the county historical society’s museum. I’d tried to stop in for a visit the previous August but had found it locked. Like other places in town, though, it welcomes many visitors during the annual spring Tulip Festival, the purpose of my most recent visit. My aunt, a cousin, and I zipped in quickly one evening during festival weekend to see a flower show. We had just enough time to walk briskly through before dashing off to find our seats at the musical across the street. As we left the museum, the kind ticket taker was nice enough to return my ticket to me so I could make a more leisurely stroll through the museum the next day. I was glad I returned.

I saw furniture from turn-of-the-century northwest Iowa and learned more about the area’s Dutch settlers, a group that included several of my great-great grandparents. I read about the difficulties immigrants faced on their voyages and saw a replica of the type of trunk and its contents with which one might have crossed the ocean. The museum houses 19th-century Dutch antiques, an impressive Dutch Bible, and the first corn stalk from an early pioneer settler’s Sioux County farm, standing tall in a wood and glass case. Several items on display were devoted to the Native

Americans who populated this prairie before European settlers arrived. Among the artifacts and clothing on display was the hide pictured on the left, which depicts an historic battle. Other displays show how the fertile prairie was turned into productive farmland. On another corner of the museum’s lot stands a small schoolhouse that shows the desks and books — not to mention the close classroom quarters — of an earlier era. You can see photos of the school here. I ended up staying longer than I expected to, as I often do when I am learning something. This museum is a little treasure — a small, unassuming building packed with local history. It’s located near the town center, across from the historic Sioux County courthouse. You can see and learn a bit more at the society’s still-developing website.

Society Saturday is a weekly blogging prompt from Geneabloggers, encouraging family history bloggers to write about a genealogical or historical society to showcase its good works, projects, or events.