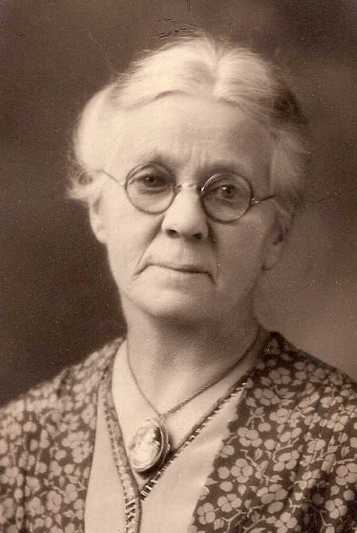 “She always had time for me,” Dad said. It’s probably the most important thing I remember my dad saying about his paternal grandmother, Petra Malum Hendrickson.

Petra was born in the village of Faeberg, near Lillehammer, Norway, more than 150 years ago today, to Peder Malum and Christina Roening Malum. Petra was born in 1867 and came to the United States as a young girl with her family in the mid-1870s, although Census data vary a little on their arrival year. One of my genealogy goals is to find the magic ship manifest that will reveal the right answer. The family likely arrived on the coast of Quebec before making their way to the Midwestern United States by a combination of water and rail travel. One story has them stopping in Chicago before finally settling in Iowa, where Petra’s father Peder Malum, like so many others in the area, set himself to farming. They eventually settled in central Iowa, specifically Hamilton County, a region that at the time was home to many Norwegian-Americans and where Petra would live most of her life, marry the son of Norwegian immigrants, and eventually raise her children.

The Malum family, whose original name was Solberg before they adopted the farm name Malum (or Maehlum), went back many generations in Norway.  Petra’s grandparents participated in the 18th- and 19th-century Haugean religious revival movement within the Lutheran Church of Norway before later generations migrated to America.  Once in America, the family seems to have moved between the Lutheran and Methodist churches. Peder Malum helped organize the local Lutheran cemetery, where his own grave is located, but he was a member of the Methodist Episcopal Church at the time of his death.

As yet, I do not know much else about my great-grandmother’s childhood years … before she married my great grandfather, Martin Hendrickson, a farmer, in 1889 when she was about 21 years old. Petra and Martin would have six children, including my grandfather Carl, all of whom grew up on the Hendrickson farm near Kamrar, Iowa, but later scattered across the Midwest and beyond. Petra and Martin lost one child, Alice, at age 2. Petra was remembered as a Methodist, but some of her children, including my grandfather, were baptized at the Bethesda Lutheran Church in Jewell, Iowa.

During the years she was raising her children, Petra lived near extended family from the Malum clan. Her sister Anna Malum Tolstrup lived with her family on a nearby farm. Petra also had a twin brother Nels, whose family lived a bit farther away in Des Moines. The obituary of Petra’s father Peder Malum indicates that in his widower years he lived with Petra and Martin’s family.

In brief searches of the local newspaper notices of the day, Petra turns up from time to time as “Mrs. Mart Hendrickson,” mostly going with a friend or family member to visit Webster City, the county seat, for a day or attending a family celebration. She is noted visiting Webster City with her husband Martin, her daughter Clarice, and her daughter Bert, among others. Here’s a taste of other brief excerpts, mostly from the Jewell Record. 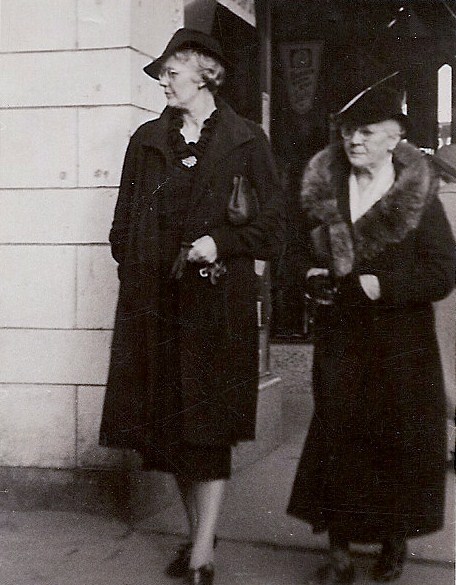 After Martin died in 1931, Petra would live for another 16 years. She lived at various times with some of her grown children, including my dad’s family in Sioux City. These were the years that my dad remembered her always having time for him and even occasionally serving as his champion in disciplinary matters, gently pointing out to Dad’s parents, apparently, that he was “just a child” when he got into mischief. At right Petra is seen walking through town with her daughter Bert, who also lived in Sioux City.

Petra is believed to have died in Illinois, where she also had family, in 1947.  She is buried in Iowa, next to Martin under the shade of a tree in the Graceland Cemetery in Webster City, with the grave of their little daughter Alice just behind them. My dad remembered attending the graveside service. Also near them is the grave of their young grandson Dean, who was their daughter Bert’s only child and died as an infant. 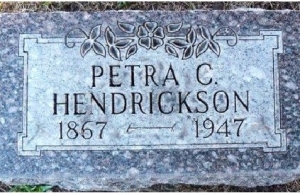 I look forward to learning still more about Petra. The portrait at the top of this post, in which I can see features of my grandfather, is one of the photos that piqued my curiosity and started me on my family history journey.

I’m glad Petra’s parents brought her to America. And thank you, Great Grandma, for raising my beloved grandfather and being a good friend to my beloved dad when he was a youngster. Happy Birthday, and rest in perfect peace.

This is the sixth post in the birthday profiles series. The series includes descriptions of ancestors on the anniversary dates of their births. It is one good way to slow down the data-gathering and consider individuals in their totality.